Our 20th Lion’s Den for Companions In Courage 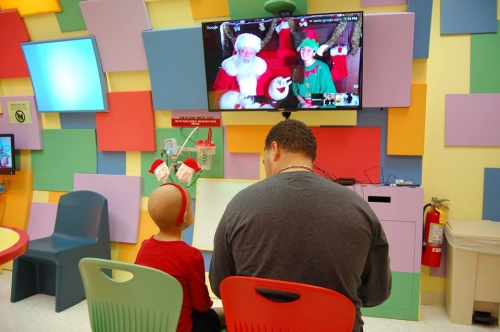 We’ve posted before about our work for the Companions in Courage Foundation, founded by National Hockey League Hall of Famer, Pat LaFontaine. We’re posting again because we’ve reached a memorable landmark – our 20th Lion’s Den installation.

What’s a Lion’s Den? Kids who face a protracted hospital stay suffer from a lot of things, including isolation – feeling cut off from their friends, families and everyday lives. Enter the Lion’s Den concept – colorful, highly interactive playrooms that offer entertainment and innovative communications tools (like live video chat) to keep kids busy and help them stay in touch with the outside world. Lion’s Dens are installed in hospitals – mostly children’s hospitals – across North America.

The latest Den – number 20 – opened in the Connecticut Children’s Medical Center. Social and traditional media coverage of the event was fantastic. You can see some of the TV coverage here.

The dens are made possible by generous individuals and corporations like the owners of the Buffalo Sabers, the NHL, Cisco, DuPont and Microsoft (a generous donor of Xbox 360s). They’re designed by ESI Design in New York and built and installed by Art Guild. Our first installation was at the Maria Fareri Children’s Hospital in West Chester County, NY in 2005. We are proud to have such a long-standing role in this worthy effort. And thanks to all the people at Art Guild who have been part of the program over the years.

About Pat Lafontaine: Before founding Companions in Courage, Pat had an incredible hockey career. Fresh from the 1984 Olympics in Sarajevo, he joined the Islanders for whom he scored 287 goals and 566 points. In 1991, he became team captain of the Buffalo Sabers, but his tenure was cut short by repeated concussions. For more on Companions in Courage visit the site.