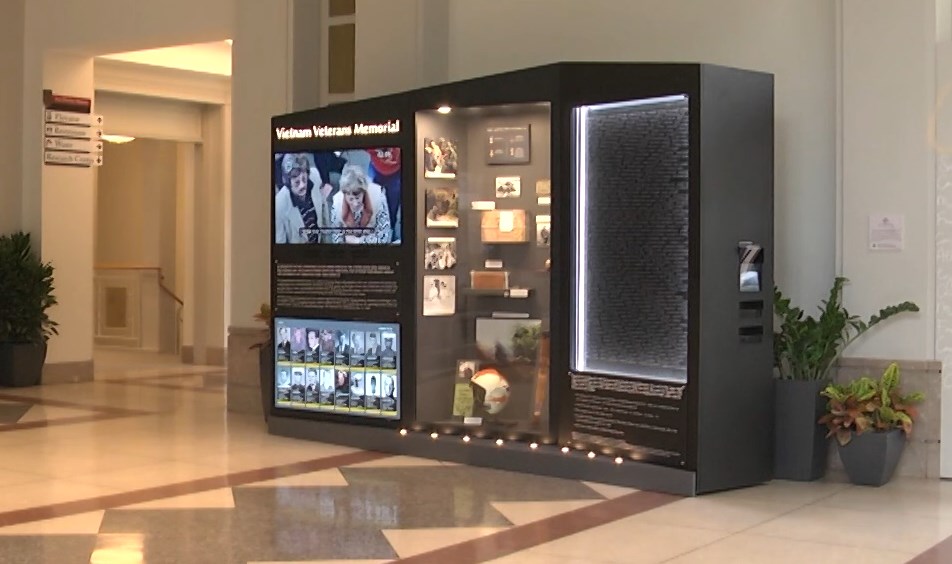 This year marks the 40th anniversary of the Vietnam Veterans Memorial commonly known as “The Wall.” The Wall was built thanks to the efforts of the Vietnam Veterans Memorial Fund (VVMF) whose mission is to honor and preserve the legacy of service, promote healing and educate people on the impact of the Vietnam War. Located in the peaceful Constitution Gardens in Washington, D.C., the Memorial consists of two 246-foot long black walls forming a ‘V’ shape. Each wall is composed of 70 black granite slabs. On these slabs are engraved more than 58,000 names of the service members who died or remain missing as a result of their service in Vietnam and South East Asia during the Vietnam War.

This story is about one of those granite slabs. Known as Panel 44, the slab was made and engraved in 1982 with 335 names – including that of a Medal of Honor recipient. It was intended to be part of the original installation, but thanks to a crack in the upper right edge it was ultimately rejected and replaced with a new slab. After that it disappeared until it was found for sale online many years later. VVMF reached out to the seller and acquired the panel. It was then displayed in VVMF’s offices until it became part of a traveling exhibit called “Panel 44” designed and built by Art Guild. See photos.

The star attraction of the exhibit is, of course, Panel 44. The exhibit also showcases a variety of artifacts and offers a video presentation that provides more information about the heroes whose

names are inscribed on Panel 44 – including the Medal of Honor recipient and the recipients of the Distinguished Service Cross. Also covered is the story of the design of The Wall – the work of a 21 year-old undergraduate at Yale University named Maya Lin. Her design beat out more than 1,400 competitors.

Currently on the road, the exhibit has spent time this year in the National Museum of the Marine Corps and the National Museum of the U.S. Army, followed by the First Division Museum in Wheaton, Illinois, and now the Museum of the Air Force in Dayton, Ohio. To learn more about the panel, it’s history and the service members listed on it – as well as the exhibit’s future tour locations – visit the VVMF’s site here. You can also watch a news video from NCTV17 – Naperville Community Television – covering the exhibits appearance in the First Division Museum.