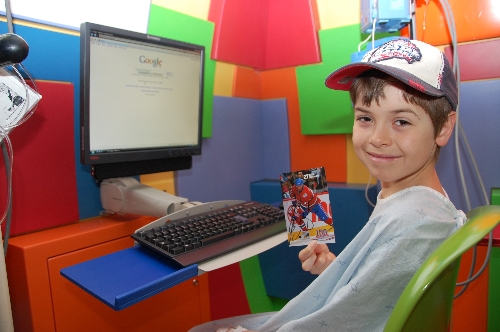 This is our 3rd blog post about Art Guild’s fabrication and installation work on the Lion’s Den program for the Companions in Courage Foundation. The first two posts recognized milestones in the program, such as our 20th Lion’s Den installation this past Spring at the Connecticut Children’s Medical Center. But this post is a little different. It recognizes something else – or more specifically someone else – Mike Fabian. Mike has led the Lion’s Den program on Art Guild’s side since it began in 2003. T 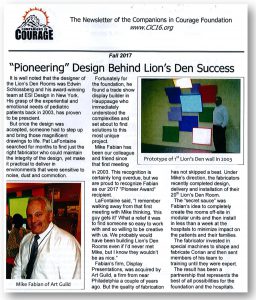 he Companions in Courage Foundation has just named him its 2017 Pioneer Award recipient, recognizing his dedication and contributions to the program’s success. One such contribution was singled out in the company’s newsletter – Mike’s idea to first fabricate each den off-site, in modules, so it could be more quickly installed in hospitals with less disruption. In fact, Pat LaFontaine, the former NHL star who founded Companions in Courage, called this the program’s “secret sauce.”

Rumor has it that receiving this award was a humbling experience for Mike, and true to form Mike immediately shared the credit, acknowledging that it takes a village to make this program work. We’ll end with the words of Debbie Rampulla, Mike’s colleague, “Congratulations Mike Fabian! And thank you for your fearlessness…it inspires us to go beyond our own experiences, and gives us the courage to achieve things bigger than we think we can.”