As a company, we have expertise in a lot of areas. You know. Designing and fabricating tradeshow exhibits, lobbies and showrooms. Fabricating museum exhibits. Designing retail displays and environments. Even creating cool digital and electro-mechanical interactives.

But apparently, we have another hidden area of expertise. So well hidden in fact, we only found out about it by watching TV. Specifically, the January 6th episode of the History Channel’s “Forged in Fire” show. On that episode Doug Zegel Jr. – our retail shop manager – won $10,000 by hand forging a Massive Maguro Bocho – basically a giant tuna knife that looks pretty much like a katana or Japanese Samurai sword (see photos).

His win makes Doug Zegel Jr. – as it’s known in the vernacular – a world-class “blade smith.” Is that the same as a blacksmith? Not according to Doug. “A black smith,” says Doug, “knows how to make a variety of things out of steel and iron – like wrought iron gates for instance. I focus on one thing – forging blades.” 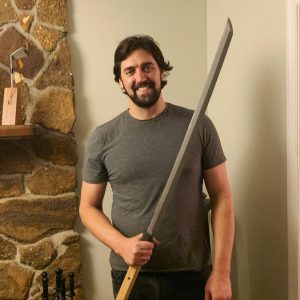 And it’s that specialty that drew the interest of the History Channel’s Forged in Fire show. The show is all about hand forged, historical blades – knives, sword, axes, maybe an occasional kitchen knife thrown in. And each episode pits four contestants against each other in a series of three forging challenges – with one contestant getting bumped after each challenge.

Now at this point, we know that you’re asking yourself a bunch of questions. How in the world did Doug get into hand forging blades? Where does he forge them? Does forging blades help Doug with his job building retail display prototypes? What was the best part of being on the show? Good questions. And lucky for you, Doug took the time to answer them.

How did he get into it? Doug says, one of his uncles introduced him to smithing when he was young. But it wasn’t until later that Doug finally got into it himself. According to Doug, his inspiration was a dull hunting knife. Now for most of us the solution would probably be an attempt to re-sharpen it, or maybe buying a new and better knife. But not Doug. Instead, he decided to forge his own hunting knife and he built his own forge at his Mt. Laurel farmhouse to do it. From there an endless series of Youtube videos taught him the rest.

How does it relate to his job? To answer this question, we have to go back to the first of the three forging challenges Doug faced on the show. In round one, the four contestants had to forge a meat cleaver, not from a nice piece of flattened steel, but from three fat, cylindrical meat hook handles that had to be smashed and welded together into a single workable piece of metal. As Doug put it, “Sure, it was a forging challenge, but at its heart it was really about problem solving. That’s exactly what my job is about. I’m given a retail display design, and then I have to figure out how to make a working replica of it from scratch, often on a really tight timeline. And that’s pretty much what happens on the show.”

The best part of the experience? Well the $10,000 wasn’t bad, but says Doug, “The other finalist on the show has now become a good friend and we’re both teaching each other new forging techniques – for instance, he showed me how to make a tomahawk head. No more reliance on Youtube.”

If anyone wants to watch the episode look for Episode 7 of Season 8 of Forged in Fire on the History Channel. It’s titled the Massive Maguro Bocho. It’s truly fascinating to watch and Doug gets a lot of screen time. And now we can be confident that if anyone needs some historical, hand forged blades, we’ve got them covered.