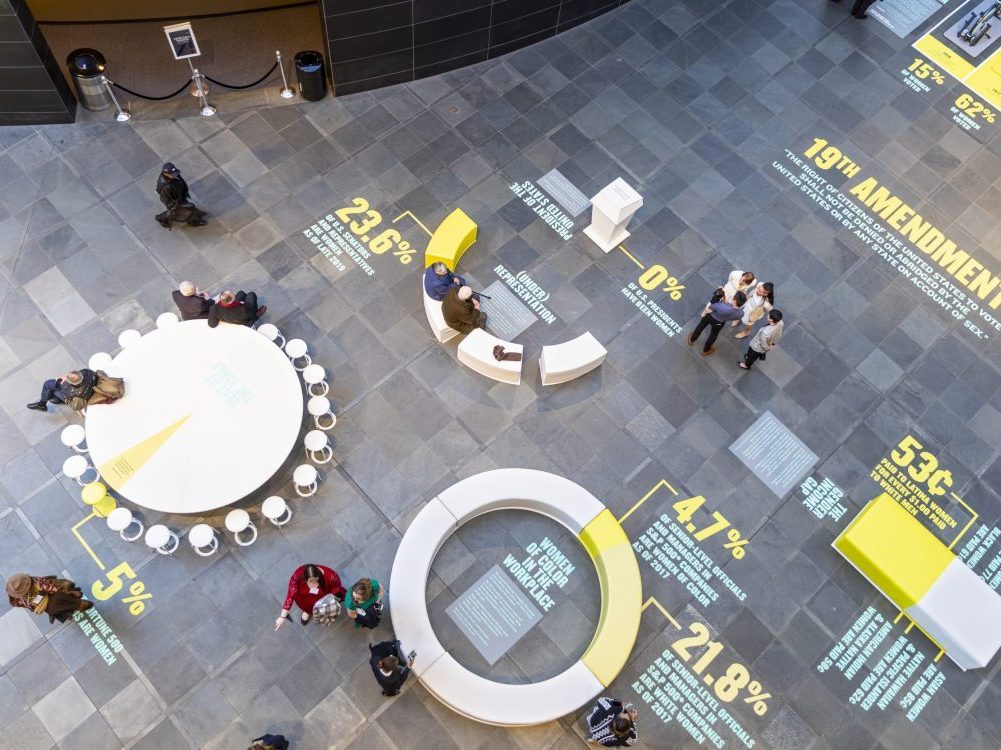 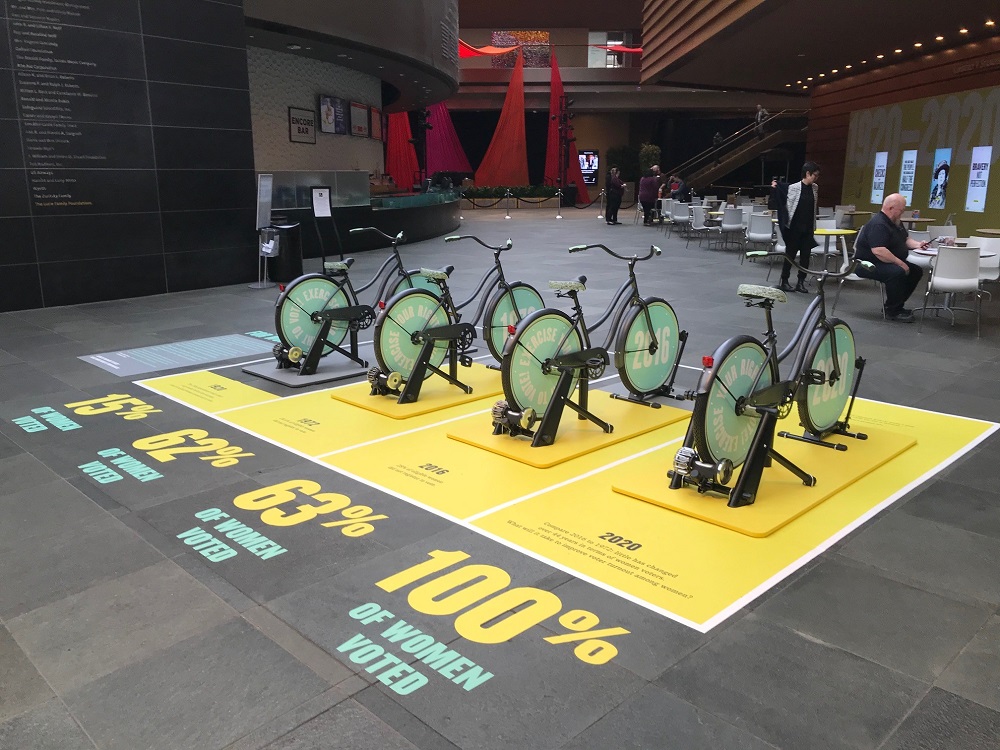 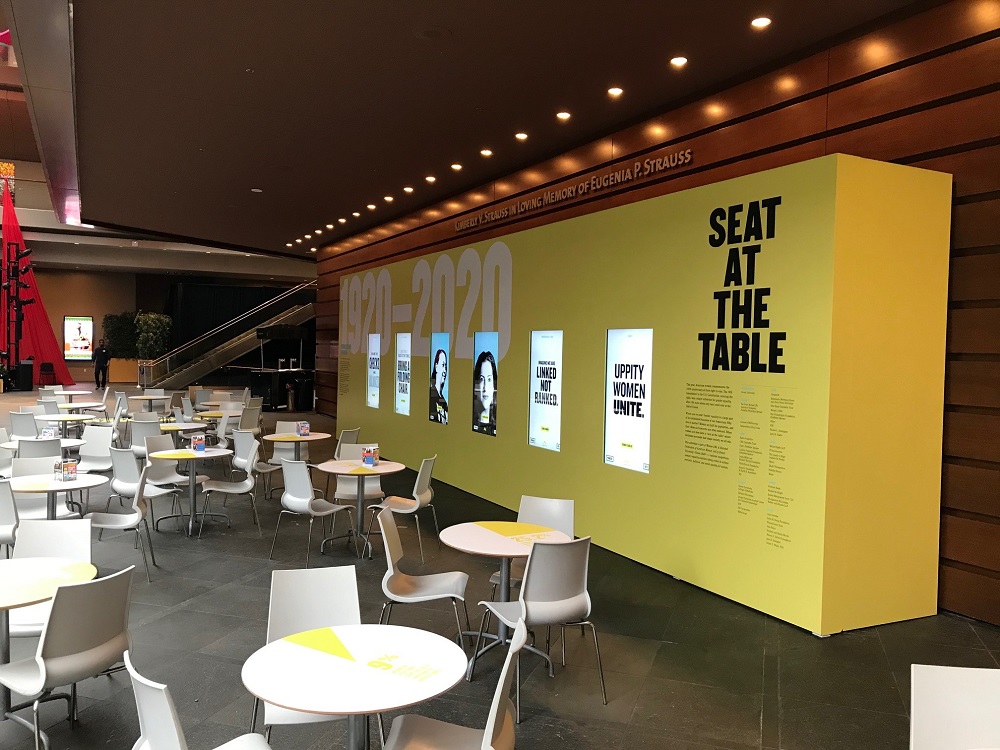 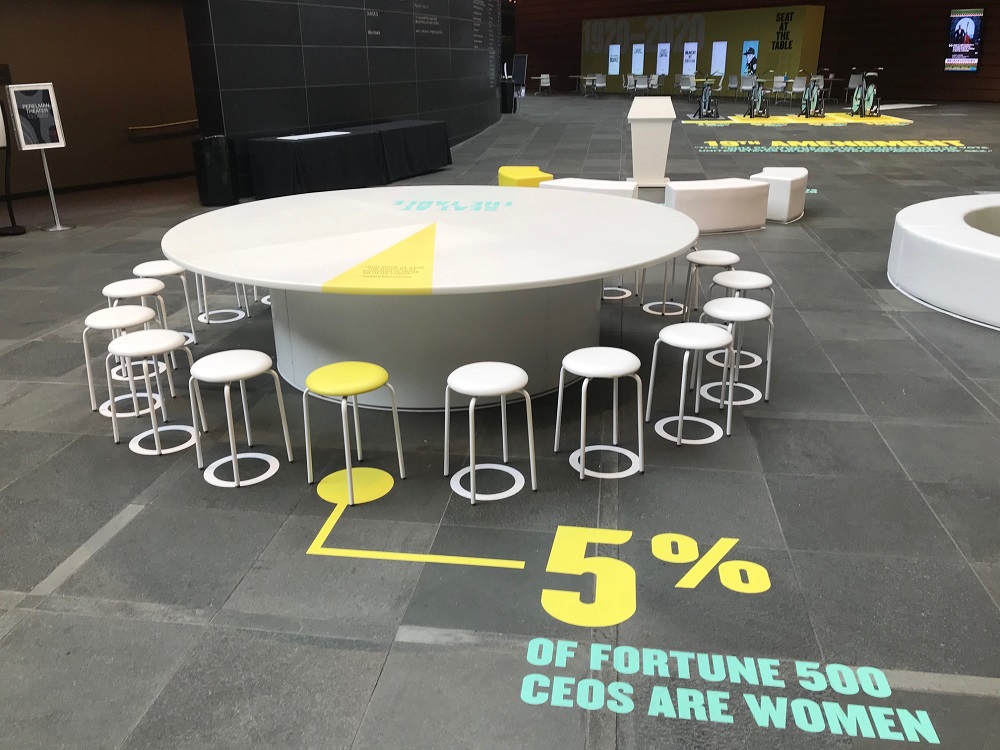 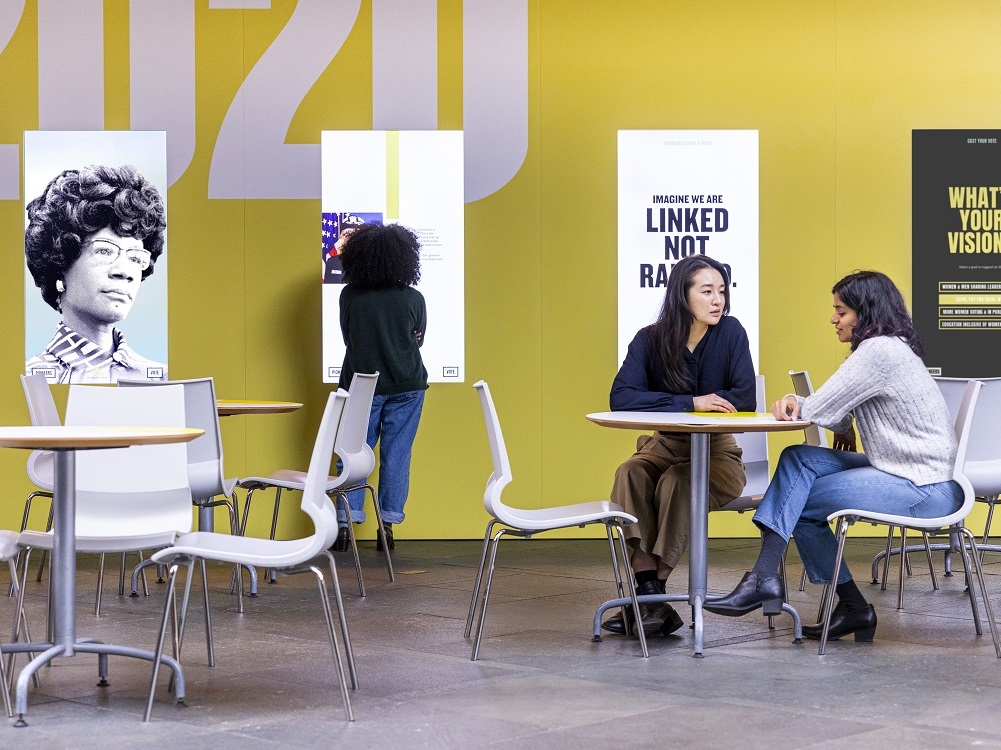 An exhibit fabricated and installed by Art Guild has just won multiple awards, but before we get to those let’s describe the exhibit.

The exhibit is called “Seat at the Table” and it’s currently installed at the Kimmel Center for the Performing Arts. It’s designed to highlight the current state of gender inequality in America and the ongoing struggle by women since gaining the right to vote in 1919. The exhibit tells its stories through seven public seating areas, each of which mixes human scale floor-graphics and custom-built furniture to create a large 3D infographic. Each infographic offers a factoid in its own unique way about the uneven ratios of men to women in work, government and society. For instance, one of twenty chairs around a boardroom table represents the 5% slice of Fortune 500 CEOs who are women. A circular bench shows the divisions of 21.8% white women and 4.7% women of color in management positions. Half of an oversized chaise lounge represents the 53 cents paid to Latina women for every $1.00 paid to white men. Other exhibits include four exercise bikes that visitors pedal to “exercise their right to vote,” a series of interactive screens inviting visitors to vote on gender advancement issues and a series of exhibits telling the stories of 18 women who played pivotal roles in promoting gender equality.

Beyond this, each area acts as an open stage, inviting visitors to become participants in bringing its infographic’s story to life – an idea inspired by the Kimmel Center’s surrounding theaters. The overall message is one of stalled progress and a lot of work still to be done to ensure everyone has a “seat at the table” – followed by a strong call to action to get involved.

The exhibit was designed by Brooklyn based experiential design firm Dome for Drexel University’s Institute for Women’s Health and Leadership. Fabrication of all structures, graphics and interactives was done at Art Guild. We also installed the exhibit in the lobby of the Kimmel Center (see photos). For those interested in visiting note that due to the pandemic the Kimmel Center is currently closed, but plans to reopen Fall of 2021.

Back to the Awards

First “Seat at the Table won the Merit Award for Experiential Design at the ADC Annual Awards, the oldest continuously running industry award show in the world celebrating the very best in all kinds of mediums including digital media, graphic design, motion, illustration, experiential and spatial design. Next, the Communication Arts Design Annual 2021 made the exhibit one of its four honorees for Environmental Graphics. Finally, the exhibit won in two categories in the Core77 2021 Design Awards taking best for both “Built Environment” and “Visual Communication.